Doil Kim, “The Core Message of Xunzi’s Claim that Xing (性) is Bad,” Dao: A Journal of Comparative Philosophy (Forthcoming, 2020) 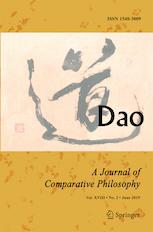 This essay is a critical discussion of Self-Realization through Confucian Learning by Siufu Tang, with a focus on its first chapter. In Chapter 1, Tang devotes himself to defending Xunzi’s (荀子) claim that xing is bad (性惡). As is well known, Xunzi presented the claim as a central point in his severe criticism of his philosophical rival, Mencius (孟子). The claim has hitherto been embroiled in controversy. Tang attempts to support Xunzi’s claim, especially, against the background of contemporary criticism of Xunzi.

Many contemporary critics have focused on two issues. First, does Xunzi legitimately judge xing (性) to be bad? Second, what exactly does Xunzi refer to by the term xing? As to the first issue, critics point out that xing in Xunzi’s thought is morally neutral, even though he misjudges it to be bad. As to the second issue, many critics claim that Xunzi’s argument against Mencius misses the point, since Xunzi speaks about different things in his use of the same term xing.

In this paper, I review Tang’s defense of Xunzi in such a way that both issues mentioned above are critically addressed. In relation to the first issue, I examine whether his two arguments for Xunzi’s claim are well established throughout Sections 2, 3, and 4. In Section 5, I deal with the second issue and argue that neither the critics of Xunzi nor Tang sufficiently identify the core message underlying Xunzi’s claim about xing.