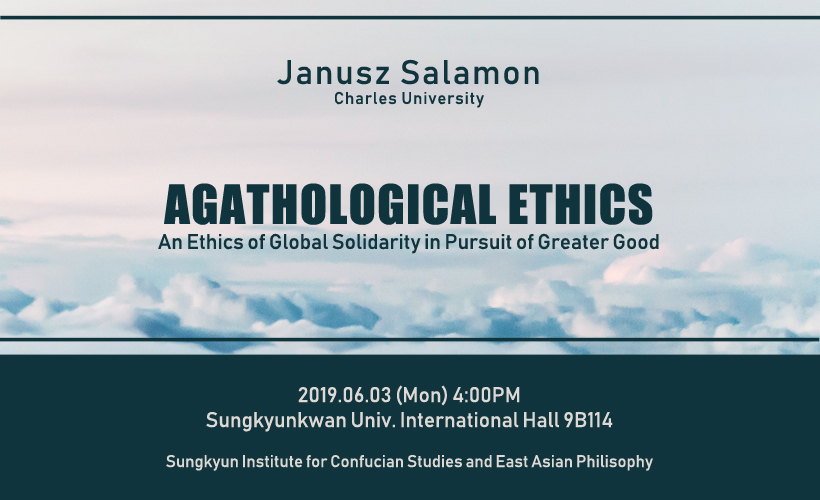 Professor Janusz Salamon, M.Phil. (Oxford University), Ph.D. (Jagiellonian University) is a member of the Faculty of Social Sciences at Charles University, Prague and Global Lecturer at New York University’s Prague Global Center. Professor Salamon specializes in global ethics, cosmopolitanism, cross-cultural value theory, and global philosophy of religion. He is the former Editor-in-Chief of the European Journal for Philosophy of Religion and former President of the European Society for Philosophy of Religion. He is a member of the Advisory Board of the Journal of Confucian Philosophy and Culture and co-editor of the book series Bloomsbury Studies in Global Ethics. His work explores constructive solutions to the challenges posed by the axiological and religious pluralism that threaten the peaceful coexistence of humanity in our increasingly global age.

A Brief Description of Agathological Ethics: An Ethics of Global Solidarity in Pursuit of Greater Good

Three decades after the collapse of the bipolar world order of the Cold War era, it is increasingly obvious that the emerging world order is going to be multipolar rather than unipolar, and that global pluralism of cultural, moral and political traditions will coexist with a deepening process of globalisation, rather than being erased by it. If we grant another uncontroversial assumption—i.e. that humanity’s capacity for self-destruction in a nuclear conflict or as a result of a man-made ecological disaster, is growing with each decade—it follows that for the first time in human history global cooperation is a pressing necessity, rather than a utopian ideal. The invisible hand of the global markets does not seem to provide reasons to hope for long-term and stable global harmonious coexistence, and so we desparately need a genuinely global ethical platform for cross-cultural dialogue about the the potentially fatal impact of global conflicts of interests, which are aggrevated by global conflicts of values. Agathological ethics is an attempt to provide a normative ethical theory that would be genuinely cross-cultural, while remaing true to the actual ethical intutions of the billions of people across the globe. Rather than being an ‘the ethics of the right’ (concerned primarily with the procedural fairness of the relations between autonomous individuals), agathological ethics is an ethics of the good (hence its name, derived from 'to agathon', which means 'the good' in Ancient Greek). However, since agathological ethics aspires to be a genuinely global ethics, it has to be able to accomodate global agathological pluralism (the plurality of the conceptions of ‘good life’), and yet to do so in a way that results in greater convergence, rather than divergence.