Wall Climbing and Inspection Robot for Locomotion in 3D Environment 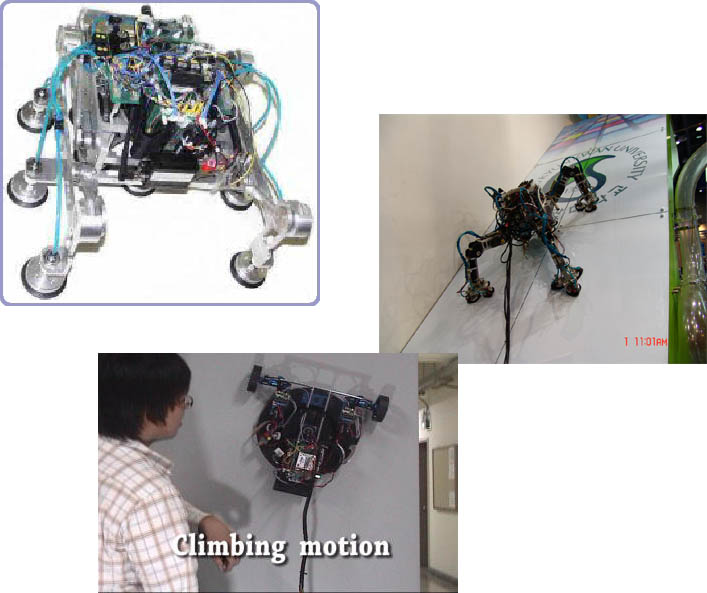 In common life, we can see many huge structures, such like bridges, buildings, ships and airplanes. And also the technology for maintaining is required, especially inspection, painting, fixing etc. But that kind of work is exposed with dangerous environment. Sometimes human could dangle on the wall. And sometimes, like nuclear facilities there is forbidden area for creature. For this environment, we developed a wall climbing robot named "MRWALLSPECT Series" and "LARVA", for inspection. With this robot, we can ensure the safety for not only the buildings but also the workers. 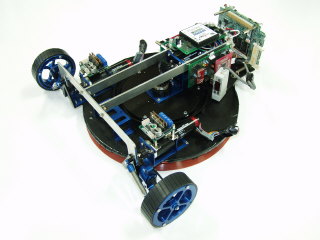 Wall climbing robot system "LARVA" is visual inspection robot for bridges using an impellent force adhesion method. This adhesion mechanism consists of an impeller and flexible suction seals which provide sufficient adhesion forces for supporting its body on the surface by keeping the air pressure inside the foot of the robot less than a critical safe value. A comprehensive study is performed on the dynamic fluid modeling of the adhesion mechanism. In addition, the stable locomotion on the vertical wall and an adhesion control method for a wall climbing robot are derived. The controller, though it is simple, provides a useful framework for controlling a wall climbing robot.

- Carring 7 kg of payload, which is 3 times of its weight.
- A single vacuum motor, two driving wheels and motors are used.
- A Single Board Computer (SBC)and two 8 bit micro controllers are use for control.
- Wireless LAN, gyroscope, vision camera is implanted. 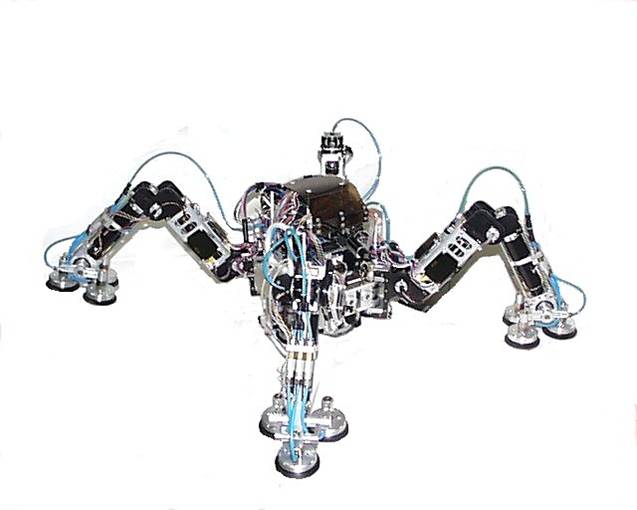 MRWALLSPECT III can walk in planes as well as climb walls with suction pad. Since the robot is expected to be able to move from wall to wall, wall to plane including negotiation convex or concave the robot. By performing intuitive and geometrical analysis, critical aspects of design such as joint ranges, design of ankles, and location of actuators are applied to the robot. And also the robot is designed to carry an ultrasonic NDT tool for inspection of the large surface of industrial utilities. 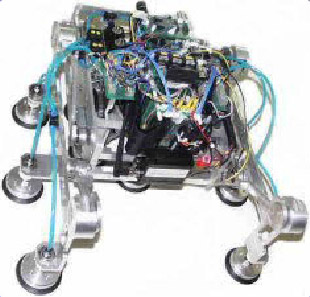 MRWALLSPECT-II is a compact and robust wall climbing robot. It is a self-contained system for scanning external surfaces of gas or oil tanks and inspecting defects with NDT(Non-Destructive Testing) tools during navigation. The robot has characteristic features in the kinematic design of the leg with closed link mechanism. It reduces the number of actuators compared to the other wall climbing robot and makes it possible to have high force-to-weight ratio. Those are enabled by adopting a simple and robust gait pattern mimicking the living creature. It includes all the components such as vacuum generators, and an embedded controller, batteries, CCD camera, motors and electronics within itself without any external tether cable. MRWALLSPECT-II which is an updated version of MRWALLSPECT-I. It is a totally self-contained system as it has its own source of electricity and compressed air. 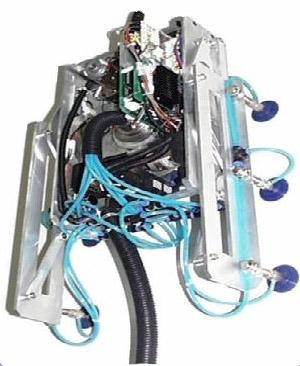 A compact and robust wall climbing robot, called MRWALLSPECT, is designed for scanning external surfaces of gas or oil tanks and inspecting defects with Non Destructive Testing tools during navigation. It accomplishes fundamental three-degree-of-freedom locomotion such as translation and rotation over the wall with a novel closed link mechanism.